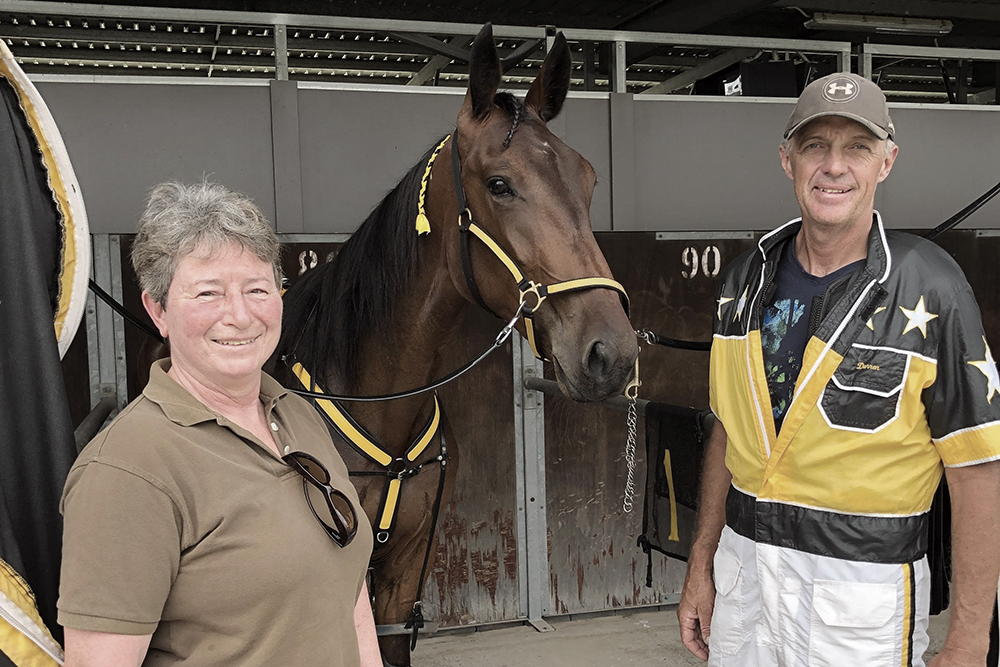 Karen Dallimore calls herself a horse “lifer,” but after some five decades of loving and working with horses, the Ontario-based writer and photographer is proud to call herself a first-time owner of standardbred racehorses — an experience that recently convinced her to jump on a plane to Australia.

“This will be my 50th year into horses. It’s mostly riding horses, but I did spend (about eight years) working with standardbreds on the broodmare end,” Dallimore said.

Dallimore said she worked at famed standardbred nursery Armstrong Bros. for about five years starting in 1985, and then spent another two years as assistant manager of Cantario Farms. She then moved Down Under for a couple of seasons to work at Alabar Farms in Australia and John Curtin’s breeding farm in New Zealand.

“I love the horses, I like the people, but I just never got involved with the racing end of it,” she said. “Unless we had a special trip for a big race — like Armbro used to take all the employees for a big race sometimes — I really didn’t get into it, I felt kind of on the edge of it if I went to the track by myself. I didn’t know how to how to break into (ownership). You go to the trackside and have dinner or something, but I just didn’t feel like I belonged there.”

That was until she heard the charismatic Anthony MacDonald’s speak about his fractional ownership group TheStable.ca at a tack shop in Fergus, ON.

“He was talking a good line. I kind of put it in the back of my mind,” she said.

When TheStable.ca bought its first weanling in 2018, Dallimore thought the time was right to buy a one per cent share in the Thinking Out Loud—Whiteglance colt.

“I like the babies and the rest were just bay horses. I had been out of the industry for so long that I didn’t recognize any of the bloodlines anymore. I had Armbro Flight and Fan Hanover in my time. It was a long time ago. They were not familiar names anymore. So, I thought, ‘He’s cute, he’s gray, he’s young. It sounds like fun. That was the first of it,” Dallimore said.

When MacDonald went on a speaking tour of Australia in 2019 and purchased two horses at a sale there, Dallimore bought a one per cent share in one of them — Girl From Oz — because of her previous connection to working Down Under and the fact the filly’s nickname is Gwennie.

“I looked at her and said, ‘She’s kind of cute.’ She looked like a workhorse, she looks like she’s all business. I just saw photos on Facebook,” Dallimore said. “They said her name was Gwennie. My mon passed away in 2005 and her name was Gwennie. The hair just went up on my arm. So, I had to go meet Gwennie. That’s what I did in February. I made a trip down to Sydney.”

Dallimore jumped on a plane on a Saturday to get there before Gwennie — who is trained in Australia by former Ontario-based horseman Darren McCall — was scheduled to race on a Tuesday at Club Menangle near Sydney. Dallimore arrived in time and met Gwennie, but McCall decided not to race her.

“They were looking for some horses to fill and they opened up the race to colts as well and (Darren) said, ‘I won’t do that to her at this point,’” Dallimore said. “I went from there to New Zealand and she did race (in Australia) while I was still in New Zealand and I did get a bet in on her. I think she was third in that race.”

On Feb. 29, Gwennie broke her maiden and provided TheStable.ca with its first international victory when she won the $50,000 Pink Bonnet Stakes at Club Menangle. Dallimore was still in New Zealand at that point, and was able to see the victory via simulcast.

“It was a great trip. It’s one of those things you say, ‘I should do that,’ but then you never do. Well, this was an excuse to just do it,” Dallimore said. “(TheStable.ca was) all over that. They sent me down with swag — t-shirts and hats. They were just thrilled that I was that enthusiastic. They’re fully supportive. (Marketing director) Kelly (Spencer) and Anthony have that energy that makes you feel like anything is possible. If you want to do something, just do it. Don’t make an excuse.”

While Down Under, Dallimore, also took time to pursue another equine passion — extreme cowboy racing.

“I wanted to do this trip so I said, ‘I need a little more excuse’ so I called up the extreme cowboy racing association in New Zealand and they invited me to do a clinic and judge a race for them. It was a total 15-day horse trip which is nice,” she said.

“I have friends who are partners in racehorses and there’s maybe four them that go in and there’s thousands of dollars invested and you’ve got to know the other people. It’s a big leap of faith to put a group together,” Dallimore said. “Anthony has done all that so it’s so easy for me to sit back and just enjoy this… He and Kelly are amazing. The way they keep you on top of what’s going on and, yet, they will still answer a personal message right away. You really feel special and they know I’ve only got one per cent, but I really feel like a special part and you’re always welcome, which is wonderful. You can invest as much time as you like. You can go down and watch them train or just sit back and watch the drone or whatever. I’m kind of looking forward to the racing, which I tried to hit with Gwennie, but that didn’t quite work out.

“I can’t wait for First Glance to see if he gets racing. He’s racing at home and that is going to be a whole different level of excitement for me… If he’s racing, I’ll be there.”

Dallimore said she thinks back to her experience working at breeding farms and wondering how the heck a person made the jump into ownership.

“You walk into the track and it’s this huge place and there’s a few guys looking at their programs, but really there’s no way to could make that connection and that’s what Anthony has done. He has made that connection. He’s opened that door,” Dallimore said.

“Anything with a horse in it is just fine by me, but I’m really enjoying the standardbreds. It’s fascinating to see that side of it.”

And even better when that exposure leads one to fly to the other side of the world to see your horse in person.