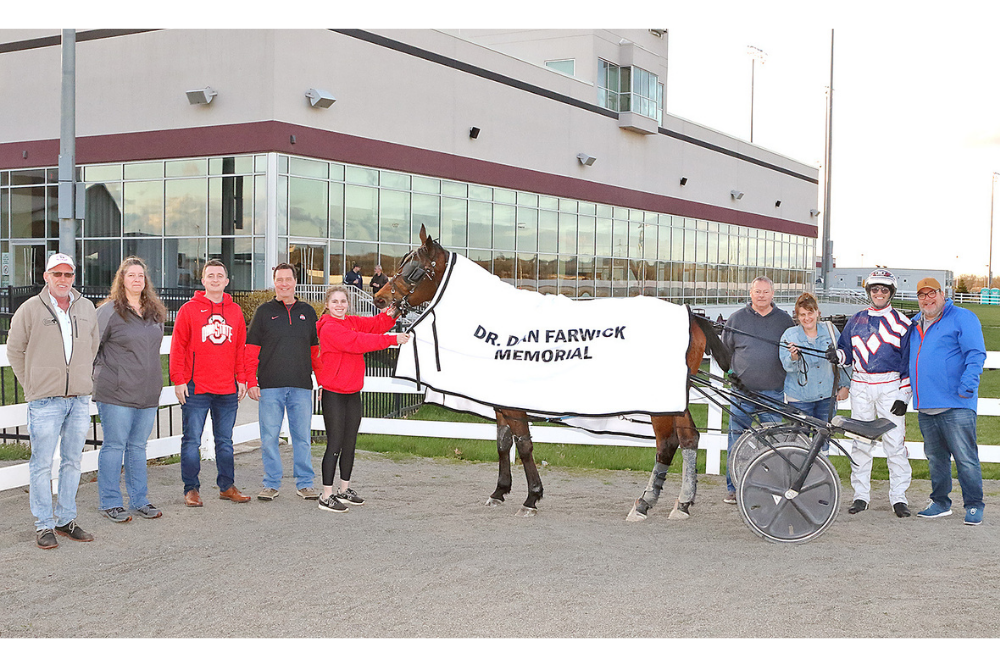 Lebanon, OH — Anthony MacDonald, founder and manager of TheStable.ca fractional ownership groups, experienced a slight delay at the Canada-U.S. border crossing on Wednesday (April 6), but made it to Miami Valley Raceway just in time to accomplish his mission. If the delay gave him time to mull over his driving options with L Dees Patrick in the $30,000 final of the Dr. Dan Farwick Memorial trotting series, it was time well spent.

MacDonald made no bones about it when the wings of the starting gate swung open — he was going directly to the front with L Dees Patrick. After the 4-year-old son of Father Patrick grabbed the lead easier than even MacDonald could have expected in a :27.4 first quarter, the pair was able to throttle down during a :29.4 second split. When tepid challenges did come in the second half, L Dees Patrick trotted quarters in :27.4 and :29.3 to seal the deal. Magical Muscle Man (Trace Tetrick) mounted the most serious challenge from second-over, but never got past the winner’s wheels while finishing second. Double Down K (Tony Hall) was third at the end of the 1:55 mile.

The triumph was the seventh in L Dees Patrick’s career, and his lifetime earnings have grown to $68,035. While in Ohio, he is conditioned by trainer Jason McGinnis.

Dr. Dan Farwick was a most respected southwest Ohio veterinarian for decades, spending much of his time helping horsemen on the backstretch of old Lebanon Raceway.