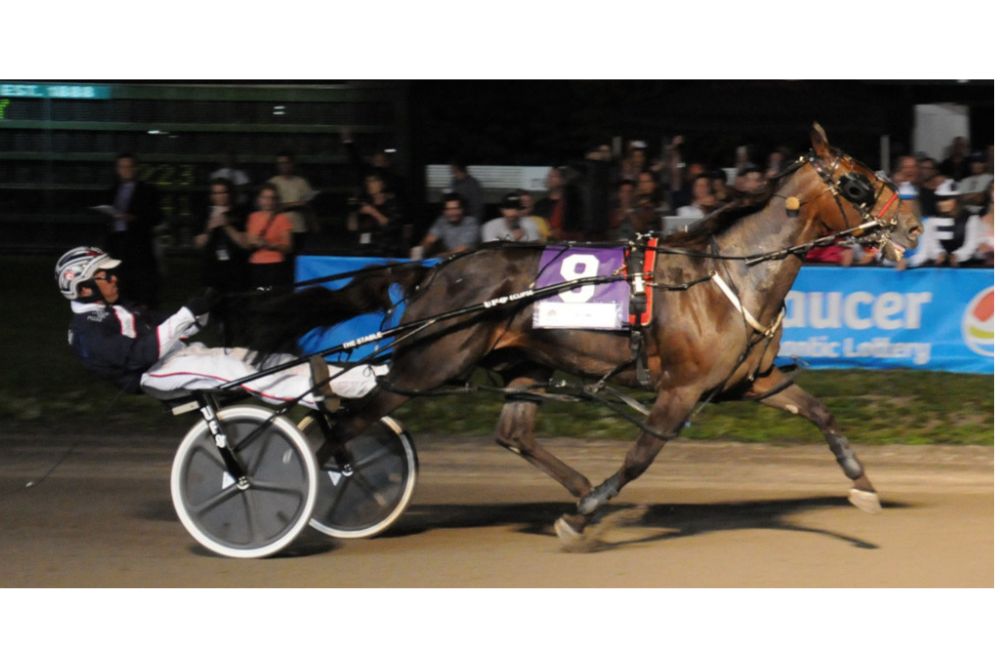 Sintra came into the 63rd edition of the Gold Cup and Saucer as the class of the field, and the classy campaigner converted for his multitude of fans and 30 owners through TheStable.ca to deliver the much sought-after title for driver Anthony MacDonald on Saturday (Aug. 20) at Red Shores Racetrack & Casino at the Charlottetown Driving Park.

A field of nine pacers went postward for Gold Cup and Saucer 63, presented by Atlantic Lottery featuring a purse of $100,000 — the first six-figure purse in the race’s history. As the wings of the starting gate folded, favoured Patrikthepiranha A (Wally Hennessey) and fourth choice Ideal Perception (Austin Sorrie) were intent on gaining the front end. Intent might not do justice to the sharp :26.1 speed duel waged by those two speedsters, with Ideal Perception finally clearing from post three as Patrikthepiranha A relented to the pocket.

Sintra and Anthony MacDonald followed Ideal Perception off the gate and was able to sit third behind that hot early tempo. MacDonald didn’t ask Sintra to move until just before the field approached the halfway point. Nearing the half-mile mark, No Plan Intended (Jody Jamieson) was gaining ground first-over but that quickly became a third-over tow. Major Hill (Pascal Berube) slid to the outside from fourth and Sintra also received right-line orders to start an outer-flow approach of his own.

Perhaps it was the sting of that sharp opening, or perhaps it was just that Sintra was enjoying the Maritime air, but the nine-year-old pacer powered past Ideal Perception before reaching the third station in 1:22.3 and opened up a quick four lengths on the field. The early leaders, Ideal Perception and Patrikthepirahna, were no longer contenders. Ideal Perception showed the effects of that early tussle and Patrikthepirahna went on a break. Jamieson had No Plan Intended well spotted to clear and land in second around the final turn, but did he have enough to collar the former Canadian Pacing Derby and O’Brien Award winner?

He did not. He rallied valiantly, but Sintra and Anthony MacDonald were in no mood for company on the front end. They were heading for the wire alone and with purpose, and the only question left was if they would break the track record. They came oh so close, hitting the wire in an awesome 1:50.1 to tie — but not break — the mark set by YS Lotus six years ago to the day (August 20, 2016).

For driver MacDonald, who was making his 13th start in the Gold Cup and Saucer and had come within a quarter length of glory before, the victory gives the longtime horseman a rare opportunity to check off a bucket list item for himself and show off this tremendous event to a number of his owners.

“Honestly, all these people represent horse racing and, you know, without them, I don’t have a job. It’s important that everybody recognizes the importance of fractional ownership and what it represents for the future of our industry. And I think you needn’t look any further than the winner’s circle to see that.”

MacDonald noted that the trip that his O’Brien Award-winning brothers Mark and James mapped out was indeed a winning one.

“It was great, worked out really good. Our plan was, actually that was Mark and James’s plan — follow the three [Ideal Perception] out and take your time.”