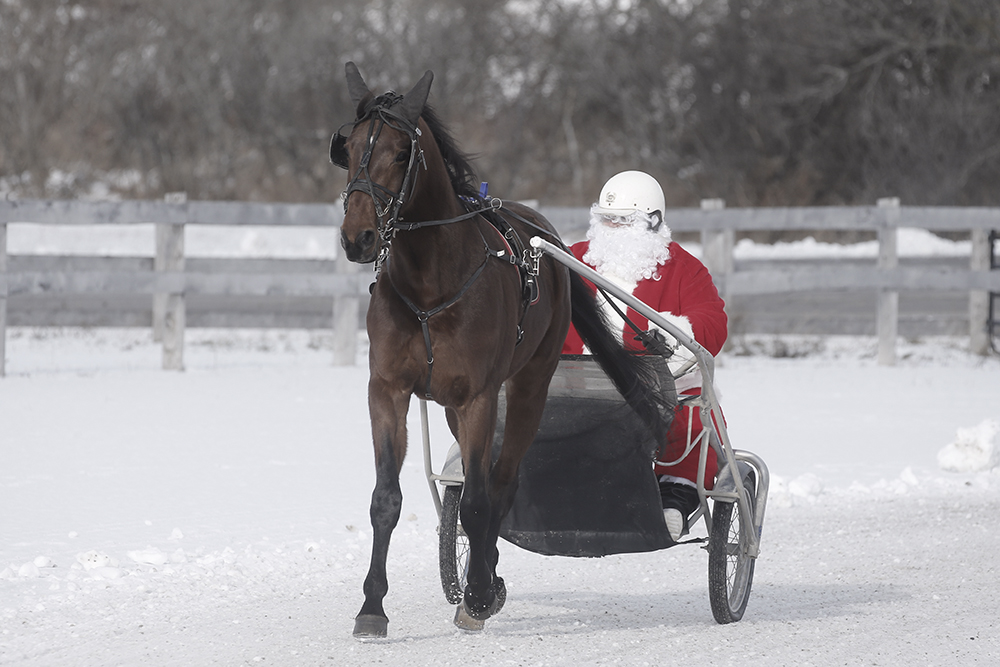 GUELPH, ON — A record crowd of more than 300 people from eight states and provinces attended the Christmas Open House on December 15 hosted by TheStable.ca, horse racing’s fastest growing fractional ownership operation and the largest harness racing stable in Canada.

Sixty-three yearlings driven by some of the country’s best reinsmen were showcased in ten sets during a four-hour livestream broadcast of the third annual event staged at Tomiko Training Centre in Puslinch, ON.

Broadcast commentators Anthony MacDonald (President of TheStable.ca), Fred MacDonald and Bill O’Donnell were joined by special guest Roger Huston. This was the 146th venue at which Huston has called races. Over his 50-year career, The Voice has announced in excess of 188,000 races in 20 states and eight countries.

Erin Massender of Guelph, ON won the Open House contest which promised a one percent share of the winner’s favourite yearling in TheStable.ca with all expenses paid for one year. Massender selected Captains Maid, a Pennsylvania-bred pacing filly by Captaintreacherous.

During each Christmas Open House, TheStable.ca raises money for a local charity. This year the company collected 250 lbs and $250 in cash donations for the Guelph Food Bank.

Santa stopped by for free photos with kids, arriving in his jog cart with freshman pacer Giddy Up Max.

TheStable.ca extends its gratitude to all attendees of the event, online broadcast viewers, drivers who participated in the sets, commentators and crew, and staff of TheStable.ca.

The Spring Open House is the next major gathering on TheStable.ca’s event schedule.

During the racing season, there are approximately 150 Standardbred horses racing in eight jurisdictions throughout North America. The horses are owned by 700+ people from 12 countries worldwide.

The innovative and engaging model invites people to own a little and love it a lot. Clients can purchase as little as one percent of a horse, making the thrill of harness racing and racehorse ownership accessible and affordable.

This award-winning fractional racehorse ownership operation was crafted in 2015 by Anthony and Amy MacDonald of Guelph, ON to remove the traditional barriers to racehorse ownership: cost, access and risk. Communication and customer service are the cornerstones of TheStable.ca. The operation embraces technological solutions to engage audiences, deliver consistent updates about the horses and create an ongoing entertainment experience.

• Open House broadcast guest commentator Roger Huston with a fan during his book-signing at the Open House (Photo: John Watkins)